Labour can be an uncomfortable, painful experience for many women. Of course the end result is worth it – you have your own beautiful bundle of joy! However, pain relief can be necessary, as some women find it too much to bear. There are many different options out there, from natural methods of relief to more medical forms of relief. Ideally, you should construct a birthing plan to help you, but it’s important to keep an open mind – birthing plans never go fully to plan! Here are the different methods of pain relief available to you during labour, and more information about each: 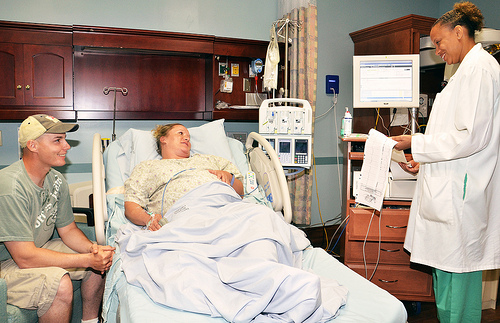 Self help is a great way to relax yourself in labour, which can help you cope better with the pain. Self help includes:

Hydrotherapy is basically being in water during labour, and this can make the whole process feel less painful for you. Ask if you can have a bath, or use a birthing pool to make things more bearable. The temperature will be comfortable but not above 37 degrees.

Gas and air is a mixture of oxygen and nitrous oxide. It won’t remove all of the pain, but it can make things more bearable. Women usually like this method as it’s easy to use and they feel more in control of the situation. You’ll take slow deep breaths through a mouthpiece as a contraction begins.

Pethidine is usually injected into the thigh or buttock and can help you to relax, which will in turn help you to feel less pain. The effects last between 2-4 hours, and it takes about 20 minutes to work. There are some side effects to be aware of with this kind of injection, including:

Some hospitals allow you to use their TENS machines, or you’re free to rent one. They are most effective for pain relief during the early stages of labour, where pads are placed on to your back. Pulses are then sent from the machine, and these are thought to help your brain release more endorphins, lessening the pain. They are also thought to distract you from the pain you’re in and help you to feel more in control.

An epidural is a local anesthetic, and numbs the nerves that carry pain impulses from the birth canal to the brain. An epidural can give complete pain relief for most women. It’s helpful in women who are having a very long labour, or those who are getting stressed. There are side effects, including:

There are other methods of pain relief available during labour, but the methods above are the most popular. Discuss other methods with your midwife or doctor and decide what’s best for you!

The Formula One racing seems to be one of those “Marmite” things; you either love it or hate it. Personally, I love every minute of it and can’t wait for the new season to begin, perhaps more so than ever before.

That’s because the required designs for the cars have undergone their most sweeping changes for a generation. Firstly, they need to embrace green technology so the 2.4-litre naturally aspirated V8 engines are out and 1.6-litre V6 turbos are in. There’s also a fuel limit of 100kg, roughly 130 litres – down from 150kg or so last year when there was no such limit. Also, engines must now consume fuel at nothing above 100kg per hour.

But the new engines will be hybrids, using ‘energy recovery system’ which harnesses kinetic energy from the back axle during braking through an electric motor that harnesses energy from the turbo which would otherwise be wasted as heat.

Such big changes will mean the results for the first few Grand Prixes could be all over the place as constructors and drivers get to grips with the new technology in real race situations. This is fun for those of us who enjoy a bet on Formula 1 now and again as the races could throw up some pretty anomalous results.

Currently with Betfair, for example, Sebastian Vettel remains a firm favourite to win the opening Grand Prix in Melbourne on 16th March. He’s also less than 2-1 with Betfair at the time of writing to retain the driver’s championship.

These look like very short odds given the huge technological changes required – and there are even more that we haven’t mentioned like the lowering of the noses of the cars, making them look like enormous anteaters. Then there are the exhaust changes which require a single, central exhaust pipe exiting over the gearbox, so the previous usage of exhaust gases to boost down-force is no longer possible.

This will, arguably, hurt Vettel-Red Bull more than anyone else – so the cards really are up in the air and a longshot on Betfair – with a few to laying the bet back at shorter odds as the season progresses looks to be the shrewdest bet – and it all adds to the fun if you’re a “love it” kind of person when it comes to F1. .

There are tons of places one can travel to with the goal of becoming fluent in English and choosing just one can be a bit overwhelming. Choosing Australia as your language-learning destination has a plethora of benefits. Not only is a country full of warm, fun-loving people with plenty of amazing English courses available in various cities, but there also are tons of unique things to see in do in Australia you can’t find anywhere else. From natural wonders to gourmet cuisine, there’s something for everyone in the Land Down Under.

If you’re into art, music, fashion, and the finer things in life there are plenty of exciting attractions waiting for you in Australia. The Australian art scene is a reflection of its eclectic culture. There are several world-class museums in the major cities including the National Gallery in Canberra that holds works from Jackson Pollock, Willem de Kooning, David Hockney, and Lucien Freud. One truly unique aspect of the Australian art scene is the presence of the beautiful and culturally rich Dreamtime art scene created by Australian Aboriginal peoples. Artists such as Gloria Petyarre (along with her other equally talented sisters) are famous worldwide for their unique paintings that reflect important cultural ideals. Much of the Petyarre work has even been reprinted onto highly valuable scarves coveted by the fashionistas from around the globe. Speaking of fashion, while it isn’t as well known as Paris or Milan, Australia has its own Mercedes Benz Fashion Week. And with designers such as Akira Isogawa creating mesmerizing collections year after year it pays to keep an eye on the up-and-coming scene.

If you’re more of the sporting type, Australia is a great place to try out some new games. The famous beaches like the ones of Byron Bay with the warm waters and white sands are perfect for learning how to surf. And you can’t visit Australia with checking out footie—Australian Football which is different from American gridiron and traditional football. Ozzies also inherited a love of cricket from their British colonizers. And if you’re into the international sports scene, the Australian Open is one of the most important tennis tournaments in the world. If you’re less into competition and more into the great outdoors, there’s no lack of adventure. From sailing along the coast to camping in the great outdoors, you’ll find more than you bargained for waiting for you in Australia. The numerous National Parks provide various topographies and climates so you could take a completely different trip once a month and never leave the country. Hiking enthusiasts shouldn’t miss an opportunity to see the natural wonder of Uluru (also known as Ayers Rock) or the Blue Mountains of New South Wales.

Next to language, food is the best way to experience a new culture. Exploring some of the exotic dishes of Australian cuisine is a foodie’s dream. Being such an isolated country/continent, much of the food culture is based on what can be produced locally. Along the coast, freshly caught fish and shellfish are unlike anything else in the world. And while they’re sold mostly as novelty, native animals such as emu, kangaroo, and crocodile are available for consumption. Australia’s large immigrant population also means there is a presence of variety in the food scene. From Italian to Korean, you’ll find whatever you’re craving freshly made. Vegetarians and vegans shouldn’t shy away due to their lifestyle choices. There are plenty of options for the meatless and cities such as Nimbin will spoil an herbivore with choices. Of course, wine enthusiasts can note that Australian presence in the market has increased drastically in recent years. A trip to the wine country in Clare Valley is the perfect adventure for your inner sommelier.

If you’re searching for a new living experience like no other while you acquire English, consider Australia as your main destination. Whatever your current interests, Australia has something for you. Plus, there are so many unique Aussie experiences to learn from while you’re on your language-learning journey.

Dani Barrow is a representative of Language Trainers, which provides individually-tailored language training on a one-on-one or small group basis worldwide.